Elias (Grizzrobe)
Team Viceroys (or Viceroy) is a Time Sweeper team created and owned by Elias (or Grizzrobe).

Team Viceroys is a group of high-ranking Time Sweeper agents who specialized in moderating the flow of time in different dimensions and neutralizing Time Glitches whenever they occur. They also infiltrate bases owned by hostile organizations, such as the Tom Tom Gang, for intel and put a stop to their plans before they've been carried out.

The team is led by founder Leland "Fluffy" Coulson and co-founder and team's hacker Samantha "Tigress" Vickers, who created the group together through unknown means. They eventually recruited more members to extend the team, with each of them playing a specific role. Leland tends to make sure that the team are focusing more on getting missions done than anything else, while Samantha guides the team through using communications and infiltrates networks when needed.

They mostly monitor World R8VP4, better known as Retrowave World, for any signs of Time Glitches or any form of trouble. When the team are not doing any missions, they would go visit Retrowave World to visit bars, shops, restaurants, and clubs in the world's cities or take a scenic route around the landscape. If they chose not to, they usually sit around and watch anime or play video games together, mostly Leland and Samantha.

As of right now, Team Viceroys consists of six members and they each have their own callsigns/nicknames when they want to refer to each other quickly.

Leland "Fluffy" Coulson: Leland is the leader of Team Viceroys. He is confident, brave, dedicated, and always motivates his team to get their assigned missions complete with no rush. He's usually in the field during missions either by himself or with someone else. He treats all of his teammates with a lot of respect, motivation, and wants everyone in his team to be respectful and help each other out when needed. He does show some annoyance towards his members' bad habits, such as Samantha's refusal to get off of her computer and Chris' catnip addiction. Despite that, he's very protective of his team and blames himself if something happens to them. Leland mostly utilizes Sweepers and pistols, but he would use other weapons in tough situations. Because of his fighting style and tactic, he might have worked for another special forces organization before he was recruited into the Time Factory.

Samantha "Tigress" Vickers: Samantha is the team's hacker and the second-in-command, who formed Team Viceroys with Leland. She has a Ph.D in computer science and possibly previously worked as a professor before she joined the Time Factory, therefore she's an expert in using computers. She is described as asocial, eccentric, paranoid, and shows signs of agoraphobic, which causes her to barely go outside for anything, especially missions, which annoys Leland. Because she doesn't go out in the field, she usually helps her team via communications, hack open infrastructure, or infiltrate networks when needed. Being the dedicated hacker and computer expert she is, she made several security and network breaches on several hostile organizations for intel and data before covering her tracks. Samantha is known for not using weapons very often, but if she has to, she usually wields pistols.

Chris "Vixen" Kelso: Chris is the youngest and the latest member to be recruited into Team Viceroys as a scout after he decided to leave his corrupt Guard Sweeper past behind. He is cocky and very arrogant, resulting in receiving hostility from other members of the team. But he is the fastest member in the team who can outrun from any form of danger when out in the field. He has a major addiction to catnip that Leland would berate him for. He also hosts a radio talk show for the Time Factory called Time Factory Mysterious Hours, in which he discusses absurd conspiracy theories while taking calls from other Time Sweeper listeners who share their own conspiracy theories. Chris' weapons of choice are lightweight Sweepers, shotguns, and sub-machine guns.

Jeff "Midas" Noone: Jeff is the team's demolition and heavy weapons expert. He is quite caring, calm, and shows boldness in tough situations. Prior to his recruitment to Team Viceroys, Jeff was a bomb-maker for an anti-government militia, where he illegally made improvised explosive devices before his arrest and his recruitment into the Time Factory when they were amazed on the explosives functionality and his role to stop planned attacks that he and his former group were planning in exchange for being acquitted and joining the Time Factory. He is also a heavy eater and the most overweight in the team. When out in the field, he shows a lot of enjoyment blowing anything up using explosives. He also provides protection to any of his teammates whenever they're in trouble. Jeff uses explosive weapons, such as rocket launchers, remote explosives, and grenade launchers over Sweepers.

Grigori "Roach" Vasilyev: Grigori is the oldest member in the team and serves as the team's field medic and surgeon. He was formerly a physician before he joined the Time Factory after he lost his wife, his son, and his close associate in a tragic yacht party bombing. He is very humble, resourceful, and very friendly to his team and anybody he meets, although he still suffers from post-traumatic stress disorder over the death of his family. He is also shown to be extremely prepared when getting ready for missions, such as having an excessive amount of Retry crystals and health kits. Usually whenever he comes across someone, he tries to have a conversation to them and half the time, they would be very engaged in it or Grigori would make them very uncomfortable due to his humble and friendly personality. He always makes sure his teammates are healthy and safe, even if they're fine and don't need any medical assistance. Grigori utilizes Sweepers more than guns, but he'll use them when needed.

Angus "Kick" Conners: Angus is the team's recon and sniper who provides intel and reconnaissance when out in the field. He is very docile, quirky, and somewhat stubborn at times. Before he joined the Time Factory and the team, he was an recon operative for the Singularity Company, a shadow black operation organization where he received extensive parkour, free-running, and reconnaissance training during the Singularity Program, an exercise program aimed towards younger operatives. Because he drinks a lot of energy drinks, Angus is hyper-active, twitches uncontrollably, and he would spaz out when something goes wrong. But despite that, Leland trusts him to be a good team member and would be by his side when needed. Because of his previous training, he's an expert at parkour and maneuvering around any terrain. He also shares his knowledge of different tactics from the organization he used to be in with his team, allowing Team Viceroys to have a well-approached method of executing missions. Angus uses sniper rifles, Sweepers, or other long-range rifles during missions.

Whatever mission Team Viceroys are signed off to do, they always have one goal: make sure it gets it done, no matter what happens out there or how it gets done. Due to Leland and Angus' prior training, the team are well-trained and are able to have a more well-rounded approach when doing missions and can think of a strategy before it gets started. Even in dire situations, they can come up with a new plan easily without panicking or accepting defeat.

Every member of the team are well-trained in using weaponry and different types of weapons they're capable of the most depending on their roles, such as Chris being able to handle lightweight weapons very effectively and Jeff using heavy weapons and explosives effectively. Samantha, however, doesn't use weapons very often because she doesn't go out very often, but with her hacking skills, they're able to infiltrate networks and infrastructures quite well and gather intel needed. But their main specialty is to intervene and stop any hostile attacks before they can be executed. Despite their specialization, Leland always encourages his members to keep training as well as train each other to improve their combat strategies and tactics, stating that "Even if our method has done us justice, we still got a lot of ways to go." 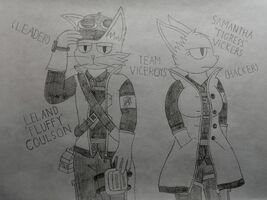 Concept art of Leland and Samantha 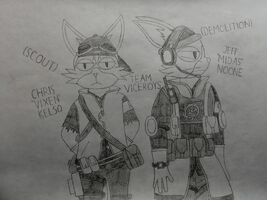 Concept art of Chris and Jeff 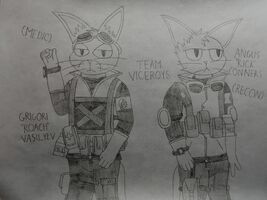 Concept art of Grigori and Angus 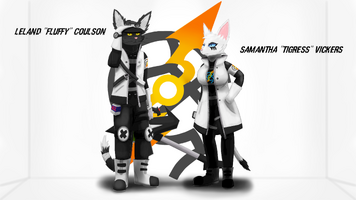 Artwork of Leland and Samantha by Cordus22 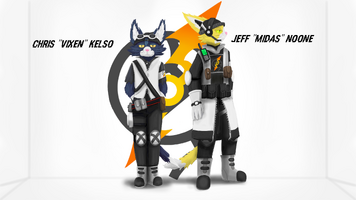 Artwork of Chris and Jeff by Cordus22 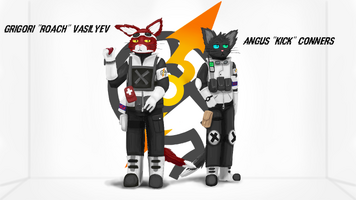 Artwork of Grigori and Angus by Cordus22
Add a photo to this gallery
Retrieved from "https://blinx-fan-characters.fandom.com/wiki/Team_Viceroys?oldid=1291"
Community content is available under CC-BY-SA unless otherwise noted.