View source
watch 01:36
We're Getting Mutants in the MCU - The Loop
Do you like this video?
Play Sound

Lemons
Team No Time is a team of fan Sweepers made by Lemons.

Team No Time is a Time Sweeper team located at Sector 1205 with Neil as the leader.

While he bears the title of "Team Leader" proudly and likes to remind everyone about it he only has to remind people because function wise Terrance is the one keeping the team together. He's also Scrag's childhood friend. He has a tendency to sign the team up for missions that are most likely outside of their skill level.

He's the real one in charge, while he lets Neil make most decisions if Neil is thinking of doing anything too risky Terrance will intervene.

Terrance is the oldest of the team and was No Time's instructor during training, he joined the team after Scrag didn't make the cut and he was convinced to join by the team's pleading to not be split up and his attachment to his trainees. The rest of No Time respects him and looks toward Terrance for any advice or input even though he usually doesn't have much to say. Due to his prior Sweeping experience he's the one to carry the team through any rough spots in a mission.

She joined the Time Factory to take after her inspiration, Blinx. She wants to be noticed by people as a great Sweeper, although that could be more from her not having that much attention from others back home, evident by her effort in Sweeping and how she tries to appear cooler to other Sweepers. She isn't that enthusiastic about sweeping but doesn't hate it, work is work.

The second oldest member of Team No Time, he comes from Paradigm Oasis World. He's a cat with a rich background, at least if you only have your eyes on him, his family is actually pretty poor and works hard to just get by but after a large amount lucky streaks at one of the local casinos Eucca was able to earn quite the impressive amount of gold. Of course all things come to an end and he lost almost all of it as quickly as he gained it.

Eucca wants to be able to help his family back at home and so set his sights to the Time Factory to find an honest job for himself that didn't rely on luck. Of course he used what gold he had left to buy a fancy new sweeper, the TS-3000 PW, and gold goggles. Even if his heart is in the right place he's still used to having a lot of gold and usually still acts like he does, he's a major impulse buyer and is almost never seen in casual clothes when he isn't wearing No Time's uniform and while not really related to money he loves to take naps too. Even though he isn't the best at using a sweeper he diligently trains and wants to do better, despite that he'll still try and be flashy in his maneuvers which can often lead to more trouble than it was worth. But even if Eucca seems to be self-absorbed he does really care about the team. He especially looks up to and respects Terrance because of his experience in Sweeping.

He has his own wiki page. Scrag is a mechanic, but since he did Sweeper Training with the team he's considered somewhat of an honorary member.

No Time gets assigned to whatever mission Neil signs them off on, unless Terrance objects to it. Depending on Neil's mood he could have actually signed the team off on something appropriate for their skill or overestimate his team and sign them up for something only Terrance could realistically handle. Thankfully for the team those situations don't happen that often since Terrance can intervene or Dona will try to talk Neil out of doing harder missions.

Sweepers used by the team: 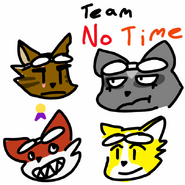 Original sketches of No Time 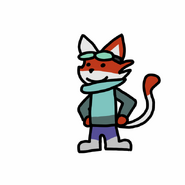 An old drawing of Neil with the No Time uniform 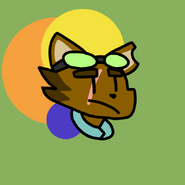 An old drawing of Terrance 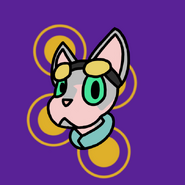 The original drawing of Eucca 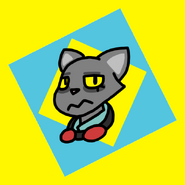 An old drawing of Dona

As far as favorite breads go here's the team's list:

Community content is available under CC-BY-SA unless otherwise noted.
Advertisement