Scrag is a Blinx fan character made by Lemons. He is currently a mechanic at the Time Factory.

Scrag wears a bright blue mechanic jumper outfit and hat with a gold badge to show he’s part of the Time Factory’s mechanic team that was shown in concept art for the versus mode in the second game.

His fur is more unkempt compared to most other Sweepers, it's where his nickname comes from. He also has a noticeable tooth poking out from the left side of his mouth as well.

Scrag's tail is striped and has fur that splits into a star shape at the end resembling a slow crystal, some Sweepers joke about how it looks more fitting on a time monster than a cat, but there isn't anything more to it than that... right? (There isn't.)

Scrag is a hard-working mechanic, though it's debatable if that's because of his passion for the job or his passion for napping on breaks. Scrag can get anxious and jumpy while working on the field in fear of an enemy sneaking upon him. When he isn't hard at work he's much more relaxed, but can be quite absent-minded or pre-occupied in thought at times making him easy to catch off guard which his friends sometimes exploit, he hates pranks... when he's on the receiving end at least. Other than disliking being pranked he enjoys the casual time he spends with his friends, especially because he can make jokes like he makes his quesadillas, extremely cheesy.

Scrag's job as a mechanic means he and the mechanic team are out on the field fixing vehicles used in combat or assembling them. Scrag is grateful for the slightly safer line of work compared to Time Sweepers, but he's secretly afraid that he might mess up one day in a way that could cause harm to someone.

While not typically part of his job, but thanks to his training, Scrag likes to mess around with modding sweepers in his free time. Scrag can also help other Sweepers by repairing them, and sometimes mods his friend's sweepers on their request, though he gets anxious thinking that he might disappoint them. He wishes someday to be able to open a sweeper modification shop and to also sell custom ones.

As a primary weapon for protecting himself in the field Scrag uses a G3000 RAY. It's not as big as a sweeper making it easier to carry around while working and using tools. Scrag usually isn't in the heat of battle, often fixing things in the field happens in safer areas farther away from the action so the mechanics can work safely. Things can still happen on the job though and the odd Tom Tom or time monster might come by, when that happens it's the G3000 RAY is good for fending them off.

Scrag uses the TS-4000 J LV2 as a backup to his G3000 RAY. It's a common grade sweeper commonly used by mechanics and technicians. While the TS-4000 J LV2 shares the same ability to sweep up heavy trash like all other 4000 model sweepers, it has a much higher and impressive trash storage capacity as well as faster sweeping speed but has no time control abilities and a slow rate of fire. So while it can’t use time powers it can hold lots of trash, much more than the average sweeper. And that's fine because it isn't primarily used for combat since mechanics more often keep a G3000 RAY on them for fending off enemies. The TS-4000 J is commonly used to clean around areas, quickly remove hazards, and sweep up large trash from where they're working on the field.

Scrag's childhood friend and current best one. Scrag is usually the first to know if Neil has any absurd hijinks planned, and typically he gets Scrag in on them too.

(Original Concept) In a trailer for Blinx TTS there's a part where the screen shows the text 'a janitor?' but crosses itself out. The idea for Scrag came from the idea of a Sweeper being an actual janitor.

Other parts of his character were based on NipChip's Blinx AU ideas, they are not used currently but were a big point in developing Scrag's character further overall.

Scrag was redesigned as a mechanic on 7/29/20 since the creator wanted to get back into fan character creation activity and the "technician" (green hat) role has very little information about it in the games (in fact even the name for the role is just an assumption). Scrag's new striped tail is a reference to back when he was involved in a time monster based AU.

Scrag's initial tail fluff evolved into a sort of upside-down star shape, so when he was redesigned the creator just made the fluff resemble an upright star by default.

The TS-4000 J used to be called the TS-1000 J before it was reclassified to fit in better with naming conventions for sweepers.

The original drawing of Scrag's newer and current mechanic design. 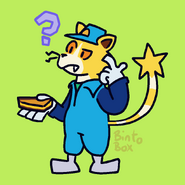 A doodle of Scrag as a mascot for some kind of cheese snack. 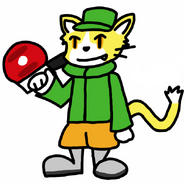 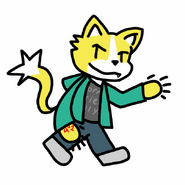 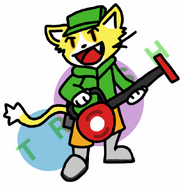 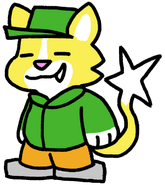 Old drawing of Scrag as a time monster. 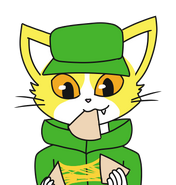 Scrag by catgirl140, as featured on the Wikia banner 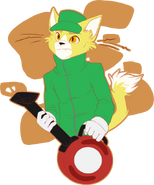 Made by Noxi! It's very cool!

Made by Sammycrow!
Community content is available under CC-BY-SA unless otherwise noted.
Advertisement