Elias (Grizzrobe)
Samantha Vickers (callsign "Tigress") is a fan character created by Elias (or Grizzrobe). She works for the Time Factory and serves as the hacker and second-in-command of Team Viceroys.

Samantha is skilled Time Sweeper hacker who provides her teammates assistance through communications and using a computer.

Samantha is a white cat with a black spot around her left eye. She has black spots all over her body, which were covered by her outfit. Her eyes are colored blue with black irises, her nose is pink, her inner ear is pink, and her white tail has a black colored tip at the end.

She wears a white trench coat with black colors on the sleeves and the bottom of her coat. with a white band and the team's emblem on her upper left arm. Her coat contains both a zipper and buttons, but it's usually opened. Underneath her coat, she wears a black buttoned shirt with a gray body armor over it, with the Time Sweeper emblem in the top middle of it. She wears a pair of white gloves and a black smartwatch over her right glove. She wears a black, cargo pants with gray holsters on both of her upper thighs. And her boots are colored white with black laces and the metal part of her boot is black.

Samantha is a highly skilled and dedicated hacker of the Time Factory. She knows a lot about technology, computer engineering, hacking, and decryption.

Despite her profound skill as a hacker, she's not an outdoor person. She's extremely paranoid, asocial, and sometimes eccentric to the point that people may look at her in a weird, odd way. She also shows signs of agoraphobia, which is a fear of places and situations that might cause panic, hence why she rarely goes outside. She spends most of her entire day on her computer, either doing hacking or anything to help her team or to watch videos online or play computer games. Because of that, she's rarely out in the field when doing missions. This caused her team leader, Leland "Fluffy" Coulson to be very annoyed about her computer habits and her refusal to go outside. Whenever Leland told Samantha to get off the computer, she always makes up an excuse stating that she's more useful to the team if she's on the computer. She also exhibits a texting addiction as well as a tendency to take pictures of herself a lot, which Leland also wants her to break and get rid of.

Much like Leland, she always checks on her teammates, making sure they're safe from any form of danger. But unlike him, Samantha doesn't do anything to help if they were in any kind of trouble, as a result she's being very dependent on Leland or the other members to help others when something bad is about to help.

Whenever Samantha is not in the mission, she would sometimes play computer games or watch videos online, as mentioned above. Sometimes, she mostly invites Leland to come over to her place and watch anime and play video games together. If she's willing to, she may also visit world R8VP4, or Retrowave World, to go shopping in the world's cities famous shopping centers or have a bowl of ramen at restaurants around the city.

Samantha is very skilled at computering and hacking that she's able to breach hostile organizations' network and collect data needed for any situations discreetly. She's also very helpful through guiding his teammates through communications, as well as hacking infrastructures and intercepting enemy communications so her teammates out in the field know what's waiting for them. She's able to decrypt coded messages and being able to read braille and Morse code, in which she used them to discreetly communicate with her teammates. Samantha also shows that she's skilled at counter-surveillance by using electronic devices on hand to temporarily jam electronics, such as radios and cameras, within her proximity. Samantha is also an expert at anonymity, being able to keep most of her backstory hidden as well as providing aliases for herself and her teammates.

Because Samantha doesn't go out much and received any combat training, she's very inexperienced in fighting. Although she can use certain weapons, mostly lightweight weapons like pistols, she hardly used them, therefore she depends another assisting member of her to protect her and themselves if she's out in the field.

Samantha doesn't have any signature equipment as she's not experienced in combat. Sometimes, she was provided weapons by others to help defend herself when out of the field, but she rarely uses them and mostly relies on her assisting teammates to protect her.

Much like Leland, Samantha's backstory remains mostly a mystery, after she erased her and Leland's profiles and records from servers that stored them and replace them with fake ones (under the name of Karen Jessie Schaeffer) to cover their tracks and leave false trails. And if she feels like to, she may talk about a few bits of fragments about her past. So far, it was revealed that she has a BA in engineering as well as a Ph.D in computer science. With having those degrees, it might suggest that Samantha used to work at a university as a professor before joining the Time Factory, although whether this is true or not is currently unknown.

During her time in the Time Factory, she has done work with different other Time Sweepers, including Gray Price, a friend of hers and a Time Sweeper agent who was murdered and disposed by Chris "Vixen" Kelso's team of corrupt Guard Sweeper for knowing about their corrupt activities. Because of that, Samantha has a big distaste towards him.

Samantha and Leland have a very strong relationship with each other, especially when they formed Team Viceroys together and she lend a hand to erase their profiles from servers that kept them. They talk to each other very often, hang out together more than the other members, and invites Leland to her place a lot.

While they do have a close relationship, they happened to have problems with each other at time. Because Samantha doesn't go outside very often, especially for missions, Leland would sometimes berate her. This also applies to the fact that Samantha spends her entire day on her computer, as well as having texting way too much and taking selfies of her a lot, in which Leland wanted her to break those bad habits of hers very soon. Other than that, Leland and Samantha are very close friends and trusted each other with their lives.

Samantha and Chris dislike each other a lot, mainly because she doesn't like Chris' cocky and arrogant behavior, his strong addiction of catnip, and his backstory as a corrupt Guard Sweeper. The third reason hits her the most because she knew and worked with Gray Price, who was a Time Sweeper who was murdered and disposed by Chris' band of corrupt Guard Sweeper because he knew too much about them and their activities. She also dislikes Chris' radio conspiracy talk show, Time Factory Mysterious Hours, finding it to be "silly", "mundane", and "not worth listening, even if it's probably satire".

Despite Chris' behavior and his activities, Samantha does find Chris to be an alright scout, as he's able to outrun his enemies with ease as well as being able to complete missions as being told to. While Samantha finds his skills to be "good enough", she wants Chris to focus more on having a more suitable personality and break his bad habits of his. However, because Leland blackmailed Chris into joining his team because of his activities as a corrupted Guard Sweeper, she often questions Leland that, stating it's not ethical to recruit members like that. This is one of the few times when Samantha defended Chris.

Although Samantha and Jeff don't talk to each other a lot, she finds him to be a reliable member in the team as well as having a personality that she can deal with. She finds Jeff's bomb-making skills to be creative and original and she also liked how caring and valiant his personality is.

However, Samantha does want Jeff to lose some weight and eat a bit less as his overweight build can be a problem if he needs to maneuver and move quickly without being exhausted.

Samantha and Grigori have a very good relationship with each other because Grigori's personality is tolerable to Samantha and they shared many similarities, such as having demanding degrees and like to play chess a lot. Samantha is also amazed by Grigori's skills in medicine and healing while he's amazed by her hacking skills.

Besides Leland, Samantha hangs out with Grigori a lot more than the others, mostly to either have food together or to play chess against each other, to test to see "who's smarter". However, they tend to grow a rivalry with each other because they sometimes accuse each other (mostly Samantha) for cheating whenever they lost, sometimes either as a joke or being serious about it.

Much like Jeff, Samantha and Angus don't talk to each other all that much, although she does find Angus to be a good and a trustworthy member of the team. She likes Angus' parkour and freerun skills and the fact that he used to be a part of the Singularity Company, a shadow black operation organization that Samantha has been trying to find more information about before she met Angus, in which he had a lot of experiences with different tactics and strategies that they taught him.

While Leland wanted Angus to stop drinking a lot of highly-caffeinated drinks, which caused him to twitch uncontrollably and spazzing out, she sometimes drinks energy drinks with him together while having chats with each other just to know a bit more about themselves, although they do agreed to keep their past low-key for now.

Artwork of Leland and Samantha by Cordus22 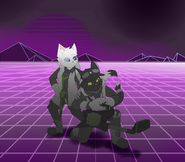 Artwork of Leland and Samantha in Retrowave World by Twitch Trappe

Concept art of Leland and Samantha
Add a photo to this gallery
Retrieved from "https://blinx-fan-characters.fandom.com/wiki/Samantha?oldid=1279"
Community content is available under CC-BY-SA unless otherwise noted.