Sammycrow
Rook is a fan character created by Sammycrow. He currently works as a Time Sweeper in the Time Factory and is a support member of Team Nightwing.

Rook is mainly known among his colleagues for two attributes – his keen eye for treasure, and his inability to hold onto it for long. He has been known to frequently splurge his salary and recovered gold on impulsive purchases, only to remorsefully trade them back in for a fraction of the asking price not long after. In spite of this, he has managed to keep two of his favourite trinkets close to his heart: a miniaturised cat medal he received as a gift from his parents upon graduation, and a replica moon-style pause crystal.

Although Rook graduated from training with decent grades, he lives up to his namesake as a relative fledgeling, gaining an unfortunate reputation in the eyes of his detractors for succumbing to his feline instincts around loud noises and bright lights. While this sensitivity to sight and sound makes him incredibly perceptive (holding the potential to make him a wildcard in battle), it also serves as a handicap early in his career. More often than not, his impulsive decision-making creates more problems than it solves; Rook is notorious for his reliance on time controls and can quickly become immobile in stressful situations. With all of these factors in mind, he has not been assigned many high-level jobs at the factory yet.

Even though he lacks many of the essential qualities of the most heroic and versatile Sweepers, Rook is renowned for his loyalty expressed towards friends and teammates. He is very chatty, eagerly engaging in morale-boosting conversations in the locker room, and sees status, class or ability as no barrier to friendship. He is also selfless - often offering to share supplies or put himself in harms’ way for the good of others. Beneath all of this lies a burgeoning lack of self-respect, however, and so it is up to Rook to learn how to overcome this without losing the more positive aspects of his personality.

Rook’s custom crescent moon goggles have been known to improve focus and scouting abilities when worn; he mainly wears them for show around his neck, since he has little use for them in his current field.

As a result of his latest shopping spree, he currently possesses an uncommon sweeper variant, the TS-4000 "Kero" LV2. While the sweeping speed on this model is below average, its range is formidable and it is incredibly lightweight, allowing its user to execute even the most technical jump manoeuvres with relative ease.

Interestingly, Rook has also chosen to have a sound suppressor installed on his personal sweeper; not for stealth purposes, but because even the sound of a vacuum makes his fur stand on end.

Rook has been assigned relatively few high-stakes jobs at the Time Factory, yet he remains keenly prepared for the day that comes. He was still in training at the time of the World B1Q64 incident and, while he had come of age at the time of the Big Crystal incident, volunteered to stay behind at the Time Factory and engage in reparation efforts following the Tom Tom Invasion – secretly lacking the personal confidence to go out into the field.

Rook holds no grudges for his current lack of career advancement, hoping to earn the respect and trust of the Supervisors and peers through his hard work and determined spirit, just as Blinx did many years before.

As the team’s leader, Raven has gained a formidable amount of respect from Rook. The two were childhood friends, separating during the later years of training before regaining contact during team recruitment. As a result of their years spent apart, Raven and Rook have grown in different ways since they first met each other, although their sense of humour continues to connect them.

Raven, in turn, has more patience for Rook than she does most Sweepers, although she is still a strict commander and is especially vocal when Rook has disappointed her. Rook once held a crush on Raven, although the two have agreed for the good of the team that they keep their friendship platonic.

Mags took over as Lieutenant early in the team’s formation, when Rook felt unable to deal with the responsibilities of the role, and he is largely grateful for this act. As she takes her work as a weapons specialist seriously, Mags openly scolds Rook for his lack of what she perceives as common sense (such as continuing to allow his custom goggles to go to waste as a mere fashion statement) but remains somewhat sympathetic to his plight as an inexperienced fighter. She often takes on the role of a confidant to Rook when he finds himself in a bind.

As the only member of the team that Rook outranks, there is a strong sense of stewardship expressed from Rook to Jay. Although Jay can be somewhat precocious and not always the best at reciprocating this interest, he secretly appreciates the efforts made to help him feel part of the team.

Jay and Rook also share a sense of camaraderie as the only male members of the team and those most often paired together on critical missions, although they also have a habit of pulling the worst out of each other, much to Mags and Raven’s chagrin. Jay has certainly been known to exploit Rook's naivety for the sake of a joke, although he has learned to own up and apologise when the repercussions are worse that he expected.

Isaac and Rook met during training and became fast friends, with Isaac unknowingly occupying the space that Raven’s departure from his life left. Isaac’s optimistic and determined spirit inspired Rook greatly during the toughest of exams, and they remain in contact despite parting ways after graduation.

While Rook has never met Blinx in person (and would never want to willingly, lest his nerves get the better of him), he grew up hearing about his sudden rise to fame following the World B1Q64 incident, coming to greatly respect the plucky Sweeper as a personal hero.

Rook became well-acquainted with Jimmy through training; although he initially misconstrued the shopkeeper’s gentle ribbing as genuine insults, he eventually came to understand Jimmy’s sense of humour and the two became fast friends. Rook sees Jimmy as a mentor figure, whilst Jimmy still hopes to do his best to teach Rook the social and combat skills he needs to succeed, even though he is formally no longer his tutor. 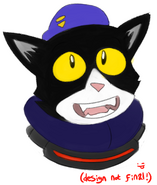 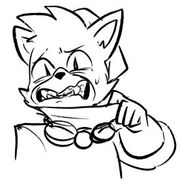 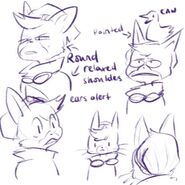 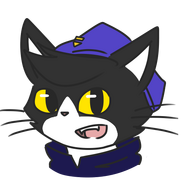 Comic excerpt by NipChip, set in the Sector 1221 universe
Add a photo to this gallery
This article is a stub. You can help Blinx Fan Characters Wiki by expanding it.
Retrieved from "https://blinx-fan-characters.fandom.com/wiki/Rook?oldid=1296"
Community content is available under CC-BY-SA unless otherwise noted.