Momo is a self-insert Fan Sweeper created by NipChip. Thus, her character is strongly influenced by the creator's personality, hobbies and interests.

She is a head shorter than the average Time Sweeper.

Momo is just your typical gamer girl artist nerd. She works as a programmer for the Time Factory's message board/network system. Her hobbies include digital art (which she posts on the message board) playing video games and spending way too much time online.

Momo has no real fighting capabilities but has a ridiculous amount of HP (somehow way more than 100) due to all the miracle smoothies she drinks to get through crunch times.

While she does not carry military weapons, you may find her carrying a laptop or drawing tablet.

She's a member of a team of programmers and software engineers that work on the Time Factory's network systems.

Keiko is fascinated by Momo as a whole, though she cannot explain why. 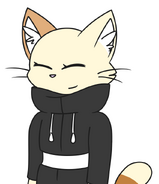 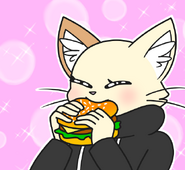 Cheeseboiga~
Add a photo to this gallery

Retrieved from "https://blinx-fan-characters.fandom.com/wiki/Momo?oldid=965"
Community content is available under CC-BY-SA unless otherwise noted.