NipChip
Keiko is a Fan Sweeper created by NipChip. She works as a Time Sweeper in the Time Factory and is the leader of Team Timewalker.

Keiko's fur is similar to that of a calico cat: a predominantly white coat with patches of black and brown. Of note is the dark brown around her eyes and the dark brown underlining the black patch. Her right ear is pointed up while her left eat points to the side. Her large tail is dipped in black with brown patches, curled at the tip.

Her outfit follows the standard Sweeper uniform with the exception of her black and dark green uniform jacket; similar to a design in MOTAS' character creator with the addition of a black strip from the collar down the centre, no secondary accent at the top of the collar and tapered stripes on the sleeves that end at the elbows.

Her looks often draw the attention of other Time Sweepers, contributing to her popularity within the Time Factory.

She's considered to be of average height.

Keiko is friendly and cheerful to everyone she meets, easily getting along with most Sweepers. She can be described as energetic, affectionate and playful. She's also known to be a bit of a flirt, regardless of gender.

Above all else, Keiko is a kind-hearted Sweeper who deeply cares for her friends' wellbeing and happiness. Whether it be kicking someone to the curb to lending an ear and giving advice, she's the first in line to come to your aid and offer support.

There's not much that can match Keiko's love for food, especially chocolate chip cookies. She spends most of her free time cooking meals and baking sweets for her teammates. Aside from working towards her goal of becoming a full-time baker, it's her way of showing affection to those around her. Naturally, she would gain a reputation as the local baker girl among the Time Sweepers.

Keiko is a skilled all-rounder who has completed all Sweeper training. Possessing one of the more powerful sweepers with all upgrades gives her an edge in battle.

She's notably aggressive in battle, preferring to overwhelm her opponent before they can get to her. She's not averse to taking risks either, having the confidence to carry out whatever plans she comes up with or her team agrees upon.

She possesses basic martial art and self-defence skills from Christopher's informal tutoring. She can knock an opponent out or force them to surrender if necessary.

Outside of combat, her hobby and speciality baking, though she has recently gained an interest in cooking. She can make some damn good cupcakes that would impress most anyone.

The TS-16000 is one of the faster models readily available and allows her to sweep and shoot trash at a fast rate.

The Shotgun is capable of hitting multiple targets thanks to its spread. It's most effective when fighting multiple Time Monsters at once. The sound of a pump-action shotgun is also a nice bonus for dramatic moments. Simple, yet powerful.

Ian is Keiko's best and closest friend in the Time Factory. They first met at their graduation ceremony and immediately clicked. From there they developed a very close bond, often pairing up for missions and hang out after work and on their shared free days. Ian's caring nature and cute quirks are things that Keiko is very fond of. She occasionally expresses protectiveness over Ian which usually gets the latter to blush.

As her second-in-command, Keiko trusts Ian will take charge when necessary. The tuxedo cat usually acts as Keiko's support on the field. The calico trusts Ian more than anyone else on the field.

Keiko will sometimes affectionally call him "Black Butt" because of well, his black butt.

Keiko has a grudging tolerance for Stuart. They frequently bicker over mundane things from whether blueberry muffins are inferior to chocolate chip to whether skipping a mission is a good idea. Part of Keiko's distrust towards Stuart is the latter constantly stealing food from her.

Despite this, Keiko respects Stuart's capacity for creative solutions and, while she would never admit it, revels in his sense of humour and unpredictableness. The red-furred cat's antics make her laugh more than anyone else. At the end of the day, she considers him as one of her closest friends.

Keiko sometimes calls him "Shortcake" as a jab to him being the shortest of the team (though it's really not by much).

Keiko holds a lot of respect for Christopher for numerous reasons: his skills, his practical and straightforward nature and his ability to keep Stuart in line with little to no effort. She doesn't mind Christopher's strong silent nature.

Messing with Christopher is one of her favourite past times, whether it be making a flirty joke or drowning him in cardboard boxes, to which the victim simply brushes off or throws her in the nearest trash can. The black cat is second to Ian as a recipient of Keiko's hugs, though he never pushes her way.

Keiko always calls him "Christo" because "Christopher is too long a name."

The relationship the two share is not nearly as close as Keiko has with the other members. Elliot holds less respect for anyone who isn't an S rank to which Keiko vehemently disagrees with. Keiko agreed to register him as a backup member due to Christopher's recommendation.

After the events of the Big Crystal incident, Blinx heard rumours of a female Time Sweeper with a reputation for baking. Having a sweet tooth himself, his interest was piqued. He soon found Keiko baking in one of the common kitchens and they hit it off.

Keiko regularly chats with Blinx and often has him be a taste tester for her new recipes. She enjoys having the number one Sweeper around for company as she finds him interesting. They've become close enough friends to the point that Blinx is one of the lucky cats that is subjected to Keiko's flirting (perhaps to the jealously of those wanting Blinx's attention). 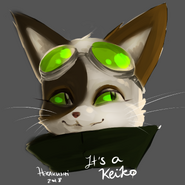 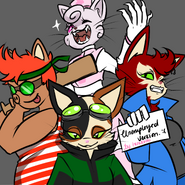 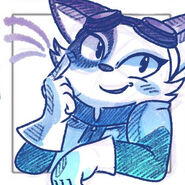 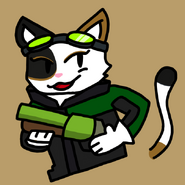 Keiko wielding her shotgun. Art by LemonDough.
Add a photo to this gallery

Retrieved from "https://blinx-fan-characters.fandom.com/wiki/Keiko?oldid=1183"
Community content is available under CC-BY-SA unless otherwise noted.